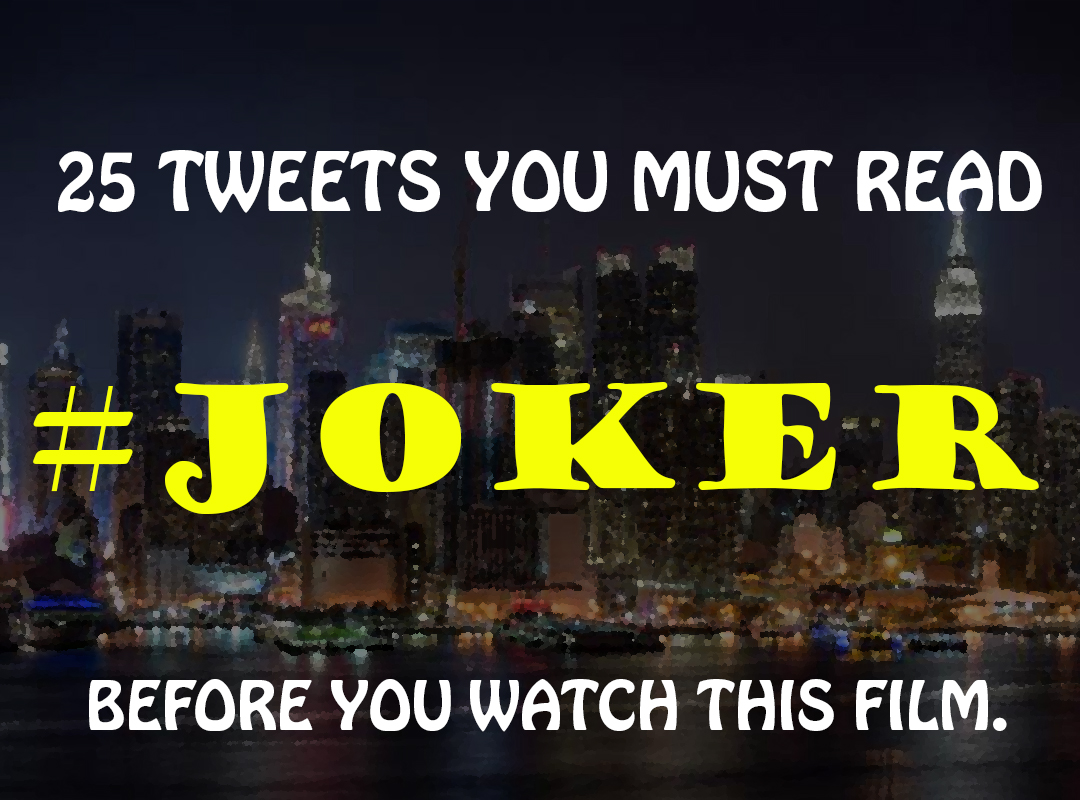 Psychological thriller Hollywood movie Joker starring Joaquin Phoenix in the title role was released on October 4, 2019. The film is directed by Todd Phillips. DC comic character Joker is one of the supervillains which grabbed the attention of lots of people around the world. Check below some of the interesting tweets about #Joker.

Holy shit #JokerMovie. Wow. Incredible film. I don't think any supervillain has been given as much attention as #Joker. Multiple iterations and portrayals across movies, TV, animation, video games, and now this amazing film.

If you weren't planning to, I suggest you watch it. pic.twitter.com/9jNGwRTjpi

#JokerMovie still has me nervy hours after watching it. True Hard R film that is a complete departure (kinda) from the rest of DC. Amazing character piece that will see Phoenix at the Oscars next year. The score is pure ear candy and the cinematography is spectacular. Go see it!

Joker tried to smile through the pain until the pain made him smile. #JokerMovie #Joker pic.twitter.com/ajzwgrsIBz

My thoughts on #JokerMovie: cinematography was excellent, the acting was great, the character development was well thought out and intensely creepy. It was a good movie... But that doesn't mean it isn't problematic as fuuuuukkkk... pic.twitter.com/A3c1m2iQvz

If you think that life imitates art or vice versa, it can capture beauty but you must also believe it can see brutality. Todd Phillips' JOKER could be one of the greatest written superhero films. Joaquin Phoenix is brilliant. Terrifying and devastating. #JokerMovie pic.twitter.com/90RYZoPFLJ

"For my whole life, I didn't know if I even really existed. But I do, and people are starting to notice."
- Arthur Fleck #Joker pic.twitter.com/Bci6uwVsA5

After watching #Joker and I am confident in saying Heath Ledger would be proud of Joaquin Phoenix’s performance of “Joker”. pic.twitter.com/d8WlS6iA3q

Why so serious? We look back at one of cinema's most legendary villains #Joker pic.twitter.com/kArzQeRE7X

If you don't love JOKER, that is perfectly fine. By the same token, it is acceptable that I do. The violence is gruesome, the commentary is too real in this age, but it is masterful.

Studios obviously waited until the end of the decade to unleash their best stuff. #JokerMovie pic.twitter.com/N4EZ9Fi2aN

Never seen a movie that took such a deep dive inside a mental illness, you’re just completely in the character’s mind. hands down one of the best i’ve ever seen. #JokerMovie #joker pic.twitter.com/alkzv4Z83n

Psychological and profound. Easily the best film of this year.

This is a paradigm shifter, changing the comicbook film landscape and the shaping the future of what it can and should be going forward

#Joker
don’t know why but I was hyped for this scene pic.twitter.com/kuENpugW0n

Guys, JOKER is a fucking masterpiece. Easily the best film I’ve seen this year. 10/10 production, but Joaquin Phoenix’s acting was the best and biggest takeaway. He is the PERFECT Joker. #Joker pic.twitter.com/JGXaR7DCFg

HELLO JOAQUIN PHOENIX CRASHED OUR SCREENING OF #JOKER AT THE END pic.twitter.com/n3KZqkraDw

Just watched #Joker. My biggest gripe is that it goes against the core of what DC stands for: that even though there’s bad out there, there’s always goodness, strength & hope from heroes (whether super or everyday) who‘ll defeat that bad. This movie didn’t have that at all. pic.twitter.com/I29MCiHIr2

Me when I enter to see #Joker vs Me when I finished it: pic.twitter.com/ZRX2MIyKRm

The torch was passed from Ledger to Phoenix #Joker pic.twitter.com/eZPZQ3lejl

Give this man the Oscar now #Joker pic.twitter.com/Nrk5dP6AWR

Everyday before I go to work #Joker pic.twitter.com/6HVYnhEdYT

So #Joker was something. Phoenix puts on an absolutely haunting, shocking performance. The score, cinematography, and directing are superb. However, this won’t be for everyone. Heck, I’m still reeling from it. Definitely a film one should sit with for a while. pic.twitter.com/UdRULZxUNL

Am I the only one? But I was fully behind the #Joker on the majority of that film. 👍🏻😂🤡 pic.twitter.com/X1EemY5Aer

One of the most chillingly, complex, and profound movies I've seen. It was heavy and I am still getting flashbacks on some of the scenes.

Watch it with a critical mind. Celebrate the acting - not the character.

Breathtakingly beautiful. Joaquin Phoenix’s performance is both haunting and brilliant. The art direction and cinematography are stunning. Loved this film on so many levels. #jokermovie #joker #joaquinphoenix #dc #warnerbros pic.twitter.com/AgD5A0PKBr